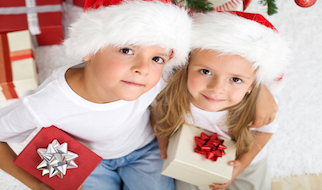 What are the Holidays Like for Children of Divorced Parents?

This month, I’ve invited author and freelance writer Paul Lindquist to write a guest post about what it was like for him during the holidays as a child of divorced parents. Paul has agreed to share his insights on how he experienced the holidays both before and after his parents were divorced, and how these experiences remain with him to this day. Take it away Paul…

Hi, I’m Paul Lindquist, and, as Roseann said, I’m a writer and author, and also the child of divorced parents. For me, it was almost like I had two childhoods – the pre-divorce years and the post-divorce years. I was born into an upper-middle class family in a small suburb of St. Paul, Minnesota. My father was a doctor, and my mom stayed at home to raise me and my two older brothers.

In my earlier years, life seemed almost perfect. Our family did everything together – we went on vacations, went to sporting events, and celebrated the holidays. Then one day, when I was in kindergarten, everything changed when my dad came home from work and announced he was leaving. A few weeks later, he was gone, and our family would never be the same.

The Pre-Divorce Holidays
Before the divorce, we were like the all-American family during the holiday season. On Thanksgiving, we would either host a major gathering of family and friends, or we would travel to Wisconsin or Illinois to visit our relatives. Soon after Thanksgiving, we would go out together as a family and pick out a natural Christmas tree, then spend the next several days decorating it.

We also put up quite a big light display outside our home, complete with a life-sized manger scene. Then of course there was the countdown to Christmas – marking off the days on the calendar and waiting for Santa Claus to arrive.

Yes, our parents allowed us to believe in Santa Claus, or at least, they didn’t discourage it. And we always got pretty much whatever we told Santa we wanted when we were at the mall. I can’t remember much more detail from that time period because I was so young, but I’ve always viewed it as a joyful season when our family was always together. Of course, I was also too young at the time to realize that all was not well with the adults.

The Post-Divorce Holidays
From kindergarten on, everything was different. Shortly after the divorce, my mom came to us and told us we could no longer afford to live the way we used to. My dad was remarried within a few months, and though he was paying alimony and child support, it apparently wasn’t enough to maintain the standard of living we’d previously enjoyed. About that same time, my older brothers broke it to me that Santa Claus didn’t really exist, and that there was no point in continuing with that charade.

We still had the gatherings for Thanksgiving, though they were smaller, but the Christmas tree and light display tradition was over. My mom purchased an artificial tree which we used for several years thereafter, and she eventually sold the manger scene and other Christmas display items in a garage sale.

Another big change after the divorce was having to split time between my parents. While my dad lived in the same area, we would alternate each year, spending Christmas Eve in one house, and Christmas Day in another. Usually, my dad and stepmom had a more elaborate tree, and I typically got nicer gifts from them, but honestly, none of that really impressed me. The only thing I really wanted for Christmas was what they couldn’t give me – a reunified family.

After a few years, my dad moved to Iowa and lived about 7 hours away by bus. The distance between us meant seeing him less, and alternating between houses on Thanksgiving and Christmas. As I grew up in this new reality, the holidays were never really a big celebration anymore. They were “okay”, and of course I liked getting the presents, but I really didn’t look forward to them like I had when I was little.

Today, I still view the holidays similarly to my post-divorce childhood years. In many ways, I see them as a source of stress. So many obligations to fulfill, presents to buy, cards to send out, school Christmas programs to attend, the list goes on. It’s not that I don’t like the holidays – I do. And being married with a 13-year old daughter, I want her to experience positive memories during her formative years as well.

But truth be told, I don’t love the holidays, at least not the way some people do. I don’t look forward to putting up the tree, decorating the tree, shopping for gifts, etc. But I do these things anyway, because my daughter deserves to have these experiences, and she deserves to have her dad’s participation in them.

My current view of the holidays was most-definitely shaped by my post-divorce childhood years. As I mentioned previously, it’s not a negative view, and it doesn’t conjure up any horrible memories or anything, and I’m totally fine now with the way things turned out. But when people ask me about a “favorite Christmas memory”, I can’t think of any from childhood. My best holiday memories have been made as an adult.

I think I could have maintained more of my enthusiasm for the holidays if our family would have tried to maintain some of the same traditions we’d established previously, and tried to stay bonded as much as possible despite my parents’ separation. I’m not sure if this would have been possible in our case, because some of the reason for the changes in traditions were financial.

That said, I think my parents could have put in a little more effort into at least trying to get along during the holidays, and maybe even trying to do something together with the family despite their personal differences. Then again, that might have been asking a little too much.

Paul Lindquist is a freelance writer and author of the book Family Forever: Our Nine-Year Adoption Journey, the true story about the long and difficult struggle he and his wife went through to adopt their daughter from the Philippines.